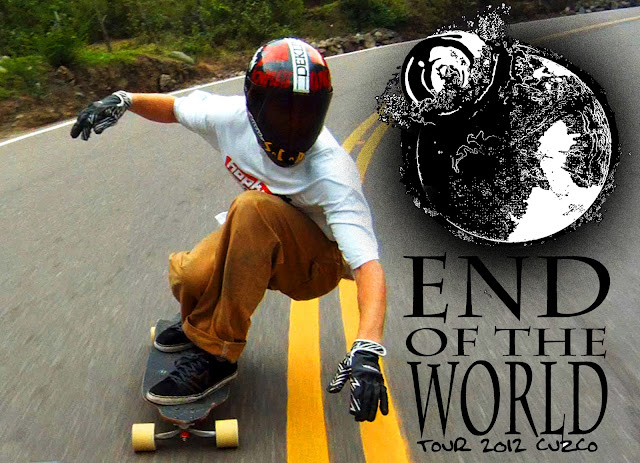 Words by Rob McWhinnie After a week traveling the Andes in search of the biggest mountains we could find, I'm stoked to have made it back safe and have had an unforgettable experience. The goal of the End of the World tour was to find Abra Malaga, the back road to the epic Machu Picchu and skate it top to bottom. Along the way we found many new roads and created friendships to last a life time. Two months ago my buddy Pablo Seone, owner of Chaman Longboards was having a beer with me at a BBQ, we were a little wasted and started talking about hills in the country that had never been skated, he rushed to the laptop that was already surrounded by people checking photos from that days freeride event and pulled up Google earth, typed in a string of words and directions in front of us arrived a massive 50km plus, 30 hairpin, middle of nowhere mountain road. It makes its way down between 2 5000m high peaks stretching 1000m above the summit of the road. 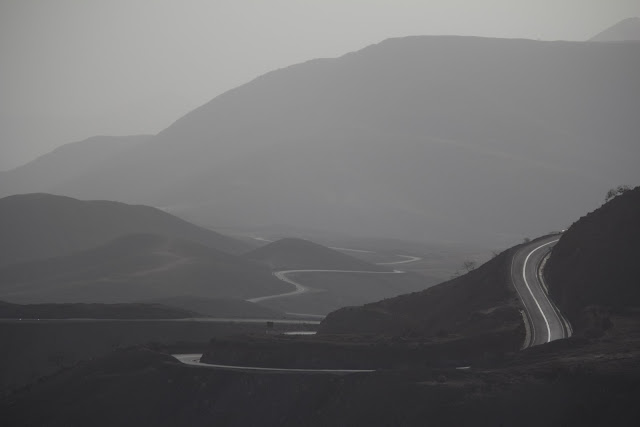 It was Abra Malaga and it was EPIC!!!! As far as we knew no one had even been close to riding it, it’s a back road through a national park to the ancient Machu Picchu, the city of the Incas, little did I know how awesome and crazy the trip would be to get there. Soon after seeing the hill on screen Pablo offered to pay our bus fare to get to Cuzco to go skate it!! Yeeeeeeww this was the start of a massive sponsor drive that eventuated in a fully paid for trip for myself and 5 good mates to reach Abra Malaga to bomb and film it. 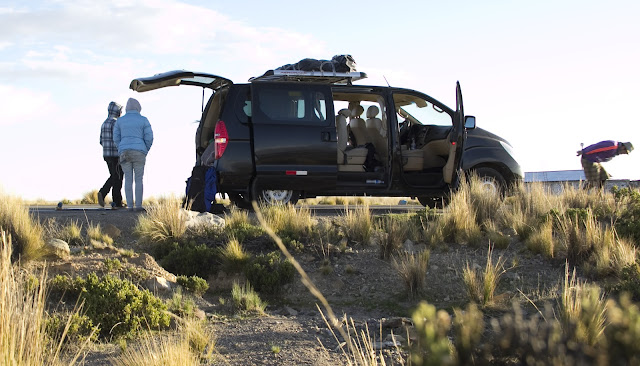 The road trip is 24 hours to Cuzco and we had a new H1 van to enjoy it. Unlike most skate trips you or I have been, this one included 3 girls and 3 guys. 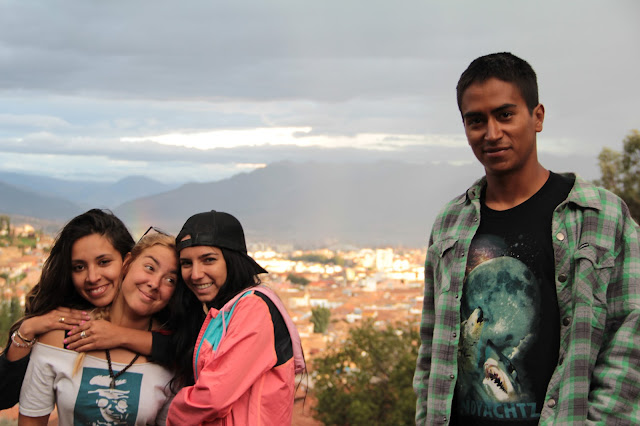 The girls were: Marisa Nunez, Ishta Backlund and Maga McWhinnie, you couldn’t choose 3 better girls to travel with, amazing, fearless skaters and positive vibes all day. Still, girls being girls they packed a shit load and took forever to wake up in the mornings. Jose Cortez and Christian Salmon would be joining me, getting rowdy and bombing everything on the trip. Jose shreds anything and Christian is an awesome videographer for Choro Longboarding helping me document the adventure. 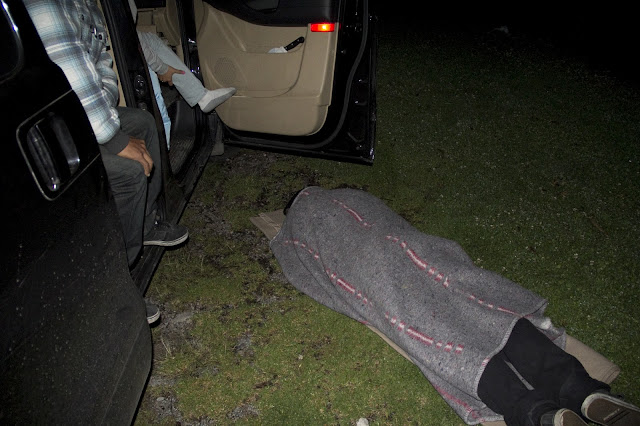 First stop on the way was Nazca, famous for its alien airports and megaliths in the lifeless desert. It is now going to be famous for the 70km downhill paradise we found on an empty road out of town, Mt Poquito ( poquito meaning small) burned most of our petrol getting up and we only had time for a little corner session every 10-15km on the way up but made plans to skate it on the way home, at the summit we stopped to check out the view and a little grommet came out of nowhere to talk and play on our boards. I’m sure Yori won’t forget us for a long time to come. 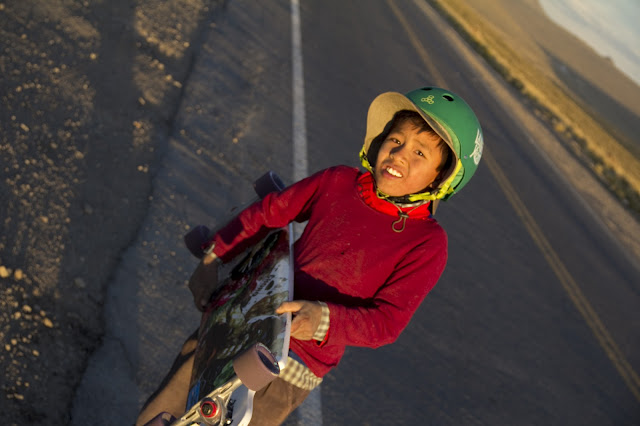 Yori on the top of Poquito

Once in we made it to Cuzco we wanted to leave and find mountains to skate. Cuzco is a crazy city, built hundreds of years ago as a treasury for the Incan empire, once including an entire garden made from gold, flowers, bugs, birds and beast would stand basking in the sun entirely made of gold. You can guess what happened when the Spanish turned up, so now the city is half Inca masterpieces and half Spanish churches, in a weird but beautiful mix. I organized free stay with a local hostel. The Kokopelli Hostel had put Marisa and Ishta up before on our Mancora Endless summer of Gnar trip and they knew what we were up to and provided us with a massive room and bunk beds for the entire week. A short drive out of town and we hit our first hill, half way down it turned into a sand pit and made for some slipping and sliding even on the straights. We could have stopped but it was a bit of fun drifting our way down. Across the Sacred Valley of the Incas, we noticed our next run, climbing high up the mountain to some ruins at the peak was a dead end road with little bridges over the rivers, hairpins around cliff faces and straights through the green farm land. We spent a full day skating Pisac, warming up for the bigger mountains to come and having some fun as a group for the first time on a hill. 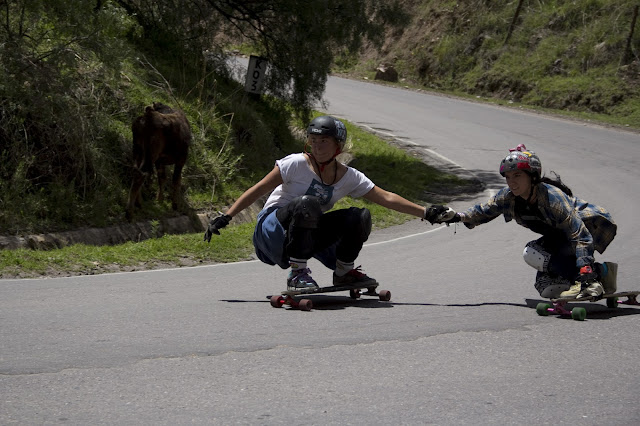 If you have seen any of my photos or videos before from longboarding in Peru you would have noticed that I’m usually in the desert of some kind. Where we found ourselves now was a green, lush, rich diversity of life atmosphere, with rivers, wild plants animals everywhere, completely relaxing and awesome. After a few days skating local roads we planned the trip to Abra Malaga, 250km away, on the way we passed all the tourist stops and ancient ruins. The closer we came the more wild and extreme the environment became, it was like stepping back into the dinosaur period. When we arrived at the base of the mountain everyone was majorly stoked to have even made it, the mountain just erupts out of the river plains, we drove skyward for an hour to reach the summit, stopping and admiring the view and unbelievable amount of hairpins and sheer cliff face passes. 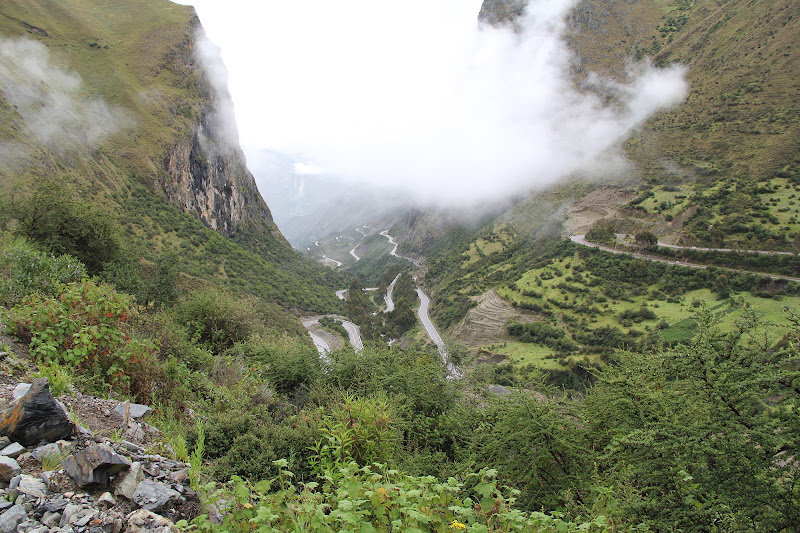 Once at the top, well damn I forgot how hard it was to breath, the environment was insane, massive clouds where blowing right up against the cliffs and moving at a speed more like smoke from a fire, after putting on rain wheels and stretching it was time to face the road and bomb it. No one except myself had rode wet weather wheels on anything seriously needing them and it took a while to convince the crew that they are shit and you will need them. I had 6 sets made up at the Fico Longboarding workshop, we customized a disk sander to rotate the wheels at warp speed and used a hunting knife to cut the wheels. Instead of sanding off the urethane it melted off like butter and produced the best wet weather wheels I’ve ever seen. So we kicked off in the dry and quickly got in the flow on the easy first section of sweepers and pins, Maga was keeping up as we all were taking it easy having fun and admiring the view as we passed between the two peaks either side of the road, it was a huge deal for her to conquer this hill as it was for me too, it was even better to be doing together. 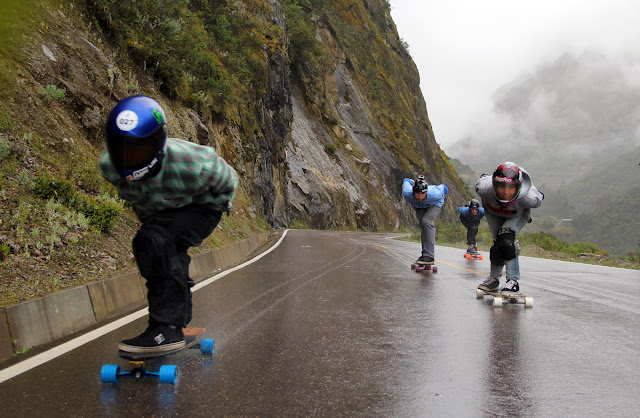 Soon it began to rain, it got steeper, colder and clouds began to block the view of the next corner, I stopped the group and we had a few practice runs at predrifting into a hairy hairpin, while it was bucketing down. We were all drenched but every one was smiling ear to ear. Jose fell in love with rain riding, blasting out standys sending out rooster tails of water. The girls got confidence to slide in the rain, locking up and railing, so we did some filming then decided it was time to bomb the steep section. I had a word to Maga and wished her luck and to take it easy, she was going to do it but at her own pace and safely, I however wanted to get sideways and have some fun so we headed off separately, the next 35mins of downhill in the rain was the 4 of us now smoking each other around hairpins and throwing massive predrifts into corners like pros in a DH race, the best thing about rain riding is it feels like your doing 80 when you bust a slide. At one stage I thought I was going to freeze solid. The wind chill at 60kmh down the straights was terrible, should have worn a full face! We stopped when the rain gave way and road started to dry, had some lunch and changed wheels, did some interviews and rang our clothes dry. I brought dry clothes hahahaha, I felt like a million bucks. The rest of the day we sessioned the bottom section, 8 hairpins 4 straights, 1 bridge, cows, horses, donkeys, kids with water bombs, hi fiving old men and perfect pavement. That has got to be one of the best afternoons I’ve skated in a long time and the biggest, longest decent I’ve ever made in my life. 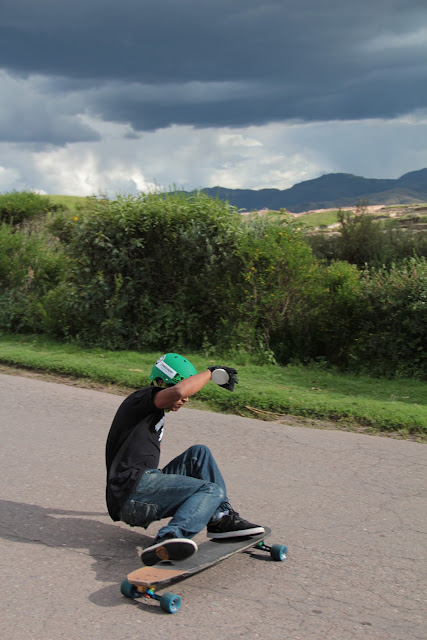 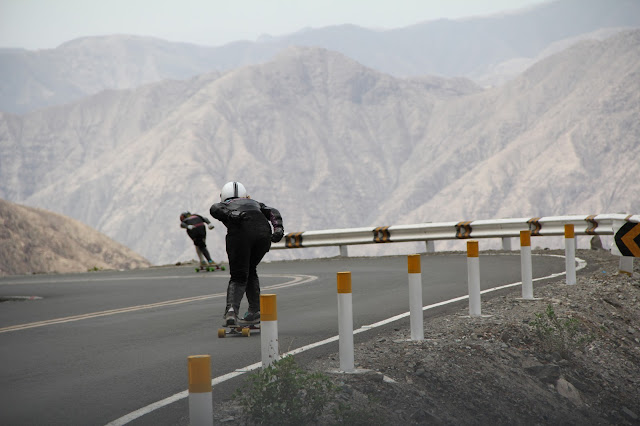 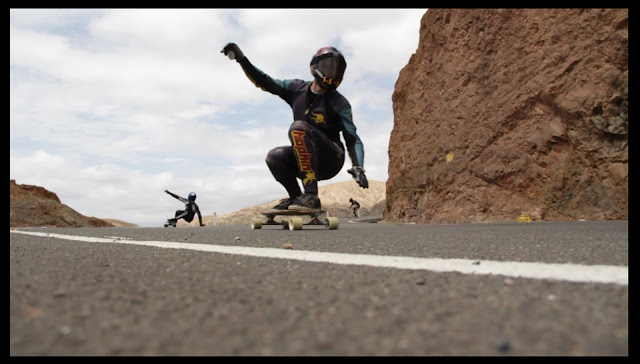 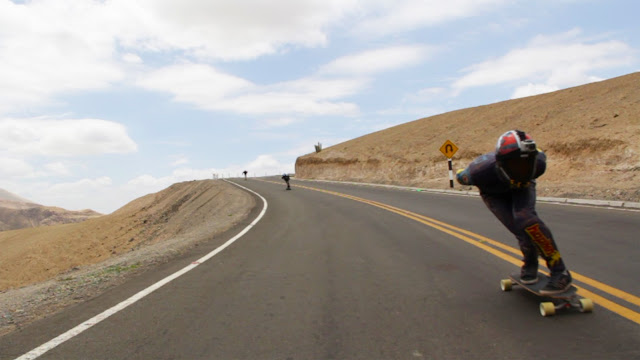 Over the next few days, we would trek to Mach Picchu and spend the day safe on a rock looking over the ancient city surrounded by mountains rising into the sky. Other days we would relax on a mountain road just having fun drafting and filming, the way home would be another 24hour trip so we planned to do it over 2 days and skated the hell out of everything we arrived at. 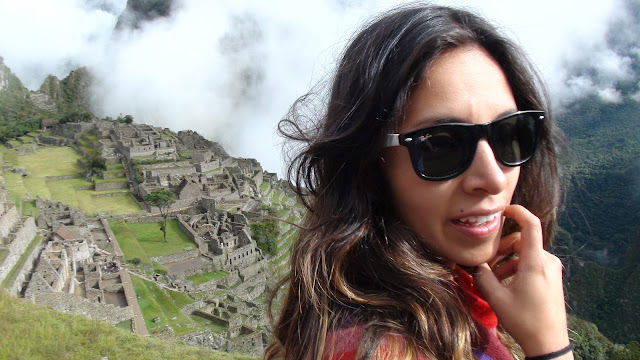 The entire trip wouldn’t have been possible with out our Major sponsors Chaman Longboards, RipTide Bushings, Rayne Longboards, Hopkin Skate and the guys at Kahalani, TeamB (arbi), Kokopelli hostels, Nuqa Clothing, Choro longboarding and Fico longboards peru. These guys believed in us and supported the whole trip, I’m stoked to represent all of them and its awesome the level of support they have shown to longboarding development and exploration. 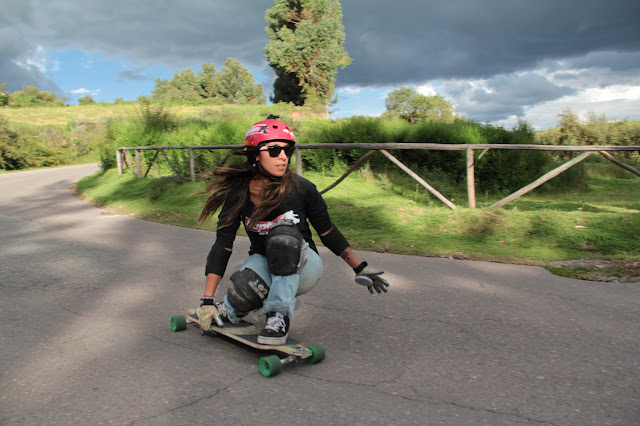 Overall the trip was incredible, I really couldn’t imagine doing it again anytime soon though, it was exhausting and extreme, its taken a solid week to lose the flu I got after riding raining mountains one day and arid desert the next. I’m glad, that like last years Across the Andes trip, I’ve discovered new roads and epic hills. It inspires the locals to leave the big cities and explore their own country, I’m stoked to have made it home safe and conquered my fear of returning to the big roads of the Andes once again. The friends that joined me will be friends for life now, we experienced some awesome shit together and risked everything to do it, downhill skateboarding is our life and we are living every day we do it. See you back home soon!!! Rob 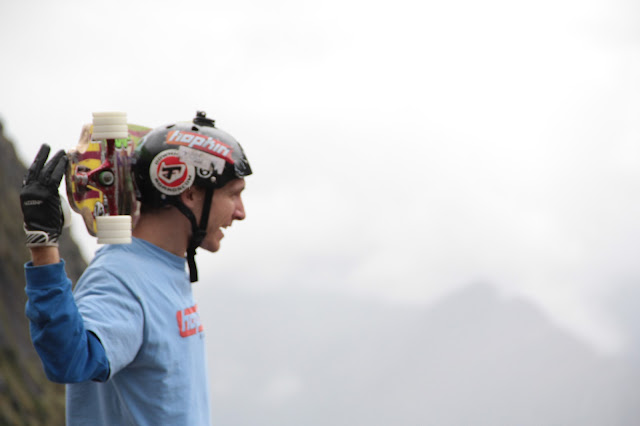