Blog Menu
It's day number 4 in Hawaii and to be honest I don't think I'll ever leave. The lifestyle that goes down in the house of Ethan Lau is easily the best way of living I have ever found. Fresh fruit from the jungle daily, butter smooth hairpins and driveways everywhere, friendly locals, no sharp things or poisonous snakes and spiders to look out for, meaning shoes are definitely not required AND you can ride in the back of a ute making hitchhiking or cruising with a big crew of skaters way too easy. When I first arrived at the airport in Honolulu it was easy enough to spot Ethan waiting for me. No shirt, no shoes and definitely no worries, the guy gives off some of the raddest vibes known to mankind. From when I saw the shaka flying out the window of the truck and the grin on his face I knew this was going to be a rad time. 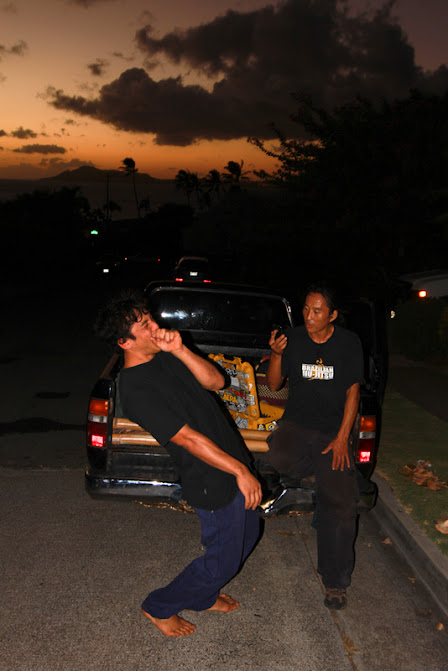 Don't worry be happy
On the drive back to Ethan's I noticed a couple of things. For one, the landscape here is ridiculous. The whole chain of islands that makes up Hawaii is all a result from some gnarly volcanic activity which makes for some insanely unpredictable landscape. This also means that nearly all the roads here are paved with volcanic rock. If you didn't already know, Volcanic rock is the smoothest most predictable and forgiving pavement known to mankind, it's even nice to push around on barefoot! Another thing I noticed was the amount of people who had built their houses further and further up into the mountains. It clicked at once that every one of those lights up there had a road leading to it and there was no way in hell those roads were straight due to the crazy angles of the landscape. I had been here 15 minutes and was already frothing. After an epic feast of fresh fruit that Ethan had harvested that day and the welcome surprise of Daniel Hawes [aussie shredder, rides for Rayne camping out in the basement I passed out, stoked to wake up and explore the zone. The next morning myself and Dani woke up way to early and decided to go and shred the neighbourhood on some mini's. The whole area is skateboard friendly in terms of smooth footpath transitions and no sharp lips on driveways. I convinced Dani to dig the Hawaii vibes and remove his shoes prior to skating and I don't think I've ever seen someone so scared from bombing a little neighbourhood hill, it definitely takes some getting used to not being able to footbreak or run off your board [or crash for that matter]. After the first bomb Dani figured he could carve to keep his speed down and we were stoked. After a little shred and a trip to the supermarket we returned to the house to find Ethan and Nelly [Ethan's rad girlfriend who bakes us cookies] awake and stoked to take us into the jungle to do some avocado harvesting for our lunch. We drove up a local favorite run called Tantalust and about halfway up pulled off to the side of the road and followed Ethan into the jungle. After a short hike we came to a huge avocado tree, usually there would be some gnarly climbing involved but the tree had sensed our coming and dropped a handful of her best fruit into the soft ground for us, thank you avocado tree for the delicious lunch. Avocado sandwiches were followed by fresh dragonfruit and giant orange-grapefuit hybrid fruit which tastes amazing [also known as crystal nectar]. And then a swim at a spot known as the China Banks. The China Banks is a long rock platform that stretches out from one of Honolulu's many beaches. You jump off the rock into the ocean and then have to wait for a big wave to lift you back up to the rock edge to get out. Getting owned by the waves against a rock isn't all that bad when the water is the same temperature as a bath! Swimming made us thirsty indeed so the next stop was one of Ethan's coconut tree harvest spots. We ninja'd into an abandoned lot filled with coconut tree's and watched him ninja up with a machete between his teeth and send a shitload of coconuts flying down to us below. After very firm instructions on how to open the bastards without removing your fingers in the process, we were all slurping down fresh, sweet young coconut juice without mercy. Free nectar is the best nectar.

Nectar or lose finger?
Coconuts were followed by an expedition into the jungle to go swim at a waterfall and cliff jump. On the way in we stopped to harvest and sample a type of passionfruit that tastes like coconut and mango. I saw it way up in a tree and Ethan was up there like a monkey in seconds to grab it for us, it was ridiculously good. Another stop was made to do some tree climbing. Guava tree's are tall, thin, strong and incredibly flexible and they grow in really close proximity to each other. This means you can climb up one and then transfer from tree to tree for as long as you can stay up there. If you need to go further to reach the next promising looking branch you just shimmy further up the giant bendy tree and the whole thing bends in the direction you wish to travel. Apparently you can travel all the way down to the river via the trees but it takes a good amount of time and the sun was setting. Next time I'll strap a go-pro to my head and try to go the full distance, this is some next-level shit. 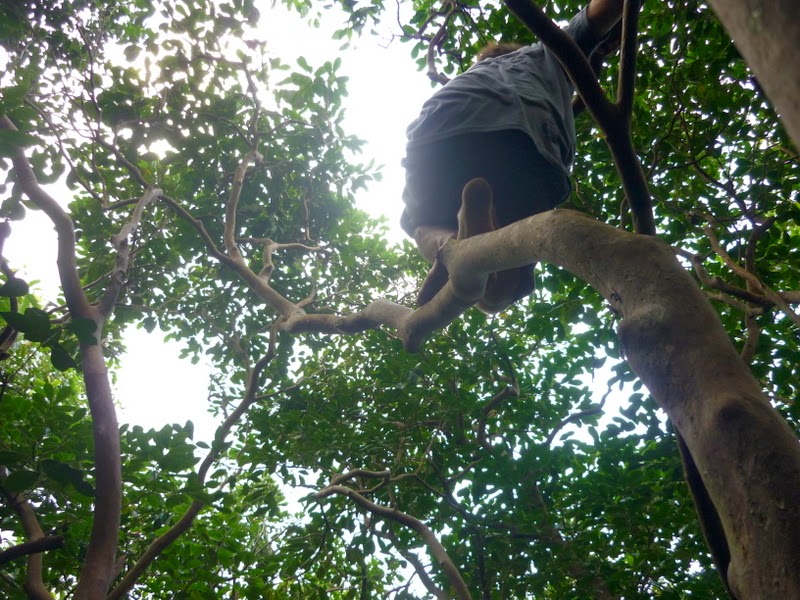 Gabe mastering extreme Guava tree climbing
Guava tree's were left to chill and the hike towards the waterfall continued. We descended into a valley and followed a creek all the way up until we reached the waterfall. If you have seen any videos of Hawaii on skatehousemedia or sector 9 you have probably seen this waterfall. The sickest part is the cliff jump right next to it. You have a deep spot about 2m by 2m to land in and a lot of unfriendly rocks if you miss. Just before I jumped Ethan went and sat up in the top of the waterfall and stopped the flow. You should have seen confusion on the tourists faces when the waterfall just stopped, the anticipation was hilarious. Then I jumped and the flow resumed and they all still couldn't see him up there messing with them. They were baffled. On the way out we harvested some bamboo shoots, these are so delicious in a stir-fry but are also really tricky to harvest and not all too plentiful. Hopefully we gather enough in the next few days to make an epic bamboo shoot pad thai. For dinner that night we went and ate some damn good cheap Sashimi, the huge influx of Japanese, Korean and Chinese in Honolulu means that there is good, cheap asian food wherever you go. Another win for Hawaii, HOORAY! To top it all off, we finished the day with a tray of freshly baked cookies thanks to Ethan's missus, Nelly. Thank you Nelly for the amazing cookies. Pretty much, Hawaii is THE SHIT, enough said. More updates coming soon, we're trying to make it out to the island of Kuwait next week for a few days. Flights are pretty cheap and apparently it's even more legit than where we are right now in terms of roads, fruit and lifestyle. I didn't think that was possible but hey, bring it! Gabe Hop's note: Skates for Sector 9 and makes videos for Skatehousemedia